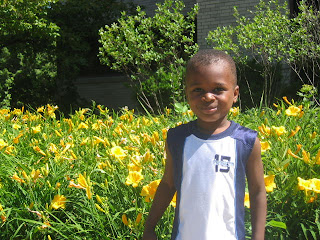 My wife and I adopted a Haitian boy last year. We named him Luke and we think he is about four years old. We brought him to the United States in February, 2007.

This post will be added to as the days and weeks roll by regarding Luke's medical saga at OSF in Peoria.

Several months ago Luke developed a medical problem. He has gross hematuria which means he is passing blood in his urine.

We did some blood tests at a local lab that is run by a lady named Joyce Harmon. After Joyce would take Luke's blood, she would kiss him, to help melt away his pain and trauma that he felt he did not deserve. Joyce charges very little for her blood tests and her lab is more a labor of love than a way for her to make any real money.

Other than the blood in his urine, Luke's blood tests were normal.

At that point, we decided to do a sonogram of Luke's kidneys. The sonogram was done at OSF in Peoria and OSF charged us $700.00 dollars for this test. The radiology group read his sono for no fee.

The sono revealed that Luke has kidney stones in his right kidney with an obstruction somewhere in his collecting system.

Several weeks later, Luke had his appointment with a pediatric urologist in Peoria who is very competent and we trust.

On June 7, 2007 we received a letter from OSF-SFMC that stated, "As a service to you we have verified your insurance coverage; however, verification of benefits is not a guarantee of payment by your insurance company that all services rendered will be covered. Based upon this verification, your estimate/deposit for this visit will be $875.00 due upon registratiion. Your payment options are credit card, cash, or personal check."

What the above means, is that OSF-SFMC wants their money as soon as possible. The $875.00 is for a lasix radionuclide scan of Luke's kidney. Like the kidney sonography bill of $700.00, these bills are not covered by our insurance and do not come off our deductible.

So I spoke with the pediatric urology office and we cancelled the lasix radionuclide scan.

On Friday, June 15, Luke is scheduled to have a cystoscopy with retrograde pyelograms performed under a general anesthesia as an outpatient at OSF.

The pediatric urology fees and anesthesiology fees are unknown at this time.