See this post from the Peoria Journal Star website.
Posted by John A. Carroll at 7:04 AM No comments: 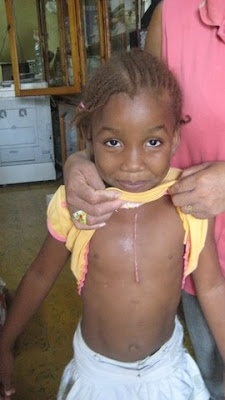 I examined Kewine for the first time in June, 2010.

Kewine was living in a tent in Carrefour, just outside of Port-au-Prince.

She was born with a Ventricular Septal Defect. This is a hole between the lower chambers of the heart that allows blood to go in the wrong direction.

Kewine was operated in the Dominican Republic in June, the hole in her heart was patched, and she is now back in Haiti.

Her mother is very happy with the results.

And so are we.

Thank you to EVERYONE involved in Kewine's care.
Posted by John A. Carroll at 6:54 AM No comments:

Patient and employee satisfaction in the OSF Emergency Department was the worst in the Medical Center in 2001.

The decision was made to relieve Dr. Miller of his duties as ED Medical Director in 2001 and to replace him with Dr. George Hevesy on August 1, 2001.

Dr. Hevesy was director of EMS in the Peoria area for many years and was on the salary of Advanced Medical Transport and OSF-SFMC.

I wrote a letter to Mr. Steffen in September, 2001 and told him of my concerns regarding long and dangerous boarding times in the ED. I cc'd all of my attending partners in the Emergency Department including Drs. Hevesy and Miller.

I was placed on probation the next day by Dr. Hevesy for writing the letter.

In December, 2001 while working a Prompt Care shift at OSF, Dr. Hevesy showed up and told me, while I was seeing patients, that Mr. Steffen wanted me in his office. We walked to Mr. Steffen's office. The OSF lawyer, Mr. Douglass Marshall was present, and I was fired.

What Mr. Steffen put my family through in his office at OSF during the months before he fired me has been documented on Peoria's Medical Mafia. Clearly Mr. Steffen should not be in charge of the largest Catholic hospital in downstate Illinois.

Here is a great article in the New York Times regarding why hospital crowding occurs. And this leads to dangerous ED overcrowding.

I thought this was happening at OSF-SFMC ten years ago.

Here is one paragraph from this article:

The major challenge for any patient in the emergency room is a reimbursement system that offers little incentive to decrease crowding or minimize boarding. Hospitals prefer patients who come in electively for scheduled procedures, at least from a financial perspective. For one thing, they are far more likely to be well insured than those admitted through the emergency room. By boarding E.R. patients in crowded halls, hospitals can offer the required emergency care for all while minimizing the effect on their bottom lines.