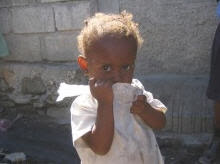 “It is increasingly rare for many of us to believe that people can be poor, but honest; poor, but deserving of respect. Poverty is no longer blamed on anyone but the poor themselves. Contempt for the poor has become virtue.”

After working a fair number of years in Haiti, I think that Haiti’s medical problems are solvable. All problems in Haiti are solvable, but this post regards how adopting certain aspects of Cuba's health system could help Haiti and, quite possibly, improve the lives of certain poor populations in the United States.

The International Journal of Epidemiology published an article in August, 2006: “Health in Cuba”. It is written by Richard Cooper, Joan Kennelly, and Pedro Ordunez-Garcia.

The authors write that no matter what one believes about the politics of Cuba, there is a lesson to be learned regarding Cuba’s health care system. And with just a little water separating Cuba from Haiti, my very small mind asks, why can’t Haiti adopt some of Cuba’s life saving public health measures?

The article reports that the word needs to disseminate that Cuba has done something very worthwhile regarding health care.

The abstract of the paper states:

“The poorer countries of the world continue to struggle with an enormous health burden from diseases that we have long had the capacity to eliminate. Similarly, the health systems of some countries, rich and poor alike, are fragmented and inefficient, leaving many population groups underserved and often without health care access entirely.

"Cuba represents an important alternative example where modest infrastructure investments combined with a well developed public health strategy have generated health status measures comparable with those of industrialized countries. Areas of success include control of infectious diseases, reduction in infant mortality, establishment of a research and biotechnology industry, and progress in control of chronic diseases, among others.

"If the Cuban experience were generalized to other poor and middle income countries, human health would be transformed. Given current political alignments, however, the major public health advances in Cuba, and the underlying strategy that has guided its health gains, have been systematically ignored.”

The authors are saying that the biomedical literature in English has been almost entirely silent on the Cuban health experience and Cuban health revolution since 1959. They think that an open discussion should take place on the potential lessons to be learned from the Cuban medical experience because the “raison d’etre of the health sciences is the discovery of new knowledge and the use of that knowledge to improve health”.

In 1991 the Soviet Union withdrew economic support for Cuba. The authors refer to this as an “abrupt economic disruption”. However, they noted, “The impact on health indices was relatively modest and short-lived, however, further demonstrating that economic measures alone are poor predictors of physical well-being within a society. One potential explanation of this anomalous pattern may be the relative absence of extreme poverty, which is the most powerful economic correlate of ill health and can confound the effect of average Gross National Product (GNP). Cuba has a high degree of income equality and lacks the marginalized slum populations of most of Latin America, although the growing dependence of the tourist economy and, to a lesser extent, foreign remittances has widened the income distribution”.

“In terms of child survival, a ‘continuum of care’ that provides for the pre-conceptional health of women, prenatal care, skilled birth attendants, and a comprehensive well-baby program can quickly reduce infant mortality to levels approaching the biological minimum. Many observers will regard these propositions as reasonable, yet hopelessly too ambitious for the poorer nations of the world, It must be recognized, however, that these principles have been successfully implemented in Cuba at a cost well within the reach of most middle-income countries.”

I have had a number of young mothers in Haiti bring in their newborns that they delivered alone at home lying on their dirt floor. One mother told me that when her newborn cried immediately after delivery, the neighbor man next door heard the baby’s cry, and rushed over and cut the baby’s cord. This neighbor man could be considered a concerned person, but hardly a “skilled birth attendant”, which almost all Cuban mothers have during labor. This scenario in Haiti is absurd and wrong and could and should be fixed.

I think the real problem is fear. How much will the gran mange in Haiti have to give up for the vast poor underclass in Haiti can live like humans? How much will the well-to-do in the United States have to give up for our poor health care statistics to improve? Probably very little. And all social classes in Haiti and the United States would live stronger and more productive lives if the slightest amount of compassion, energy, and action were directed for the benefit of the poor.

The Cuban story regarding improving the health of its population needs to get out and be implemented in resource rich and resource poor countries whose people suffer from health care inequalities.
Posted by John A. Carroll at 9:21 AM