Striking for Food in Haiti 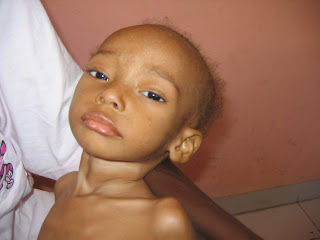 I received this e mail a few minutes ago from a Haitian Hearts patient. Frandy is 19 years old and lives with his mom and brothers. He describes the dire situation in Haiti this morning (April 6, 2008).

His ideas are his ideas and every "expert" on Haiti may not agree with everything Frandy writes. But Frandy is the hungry one, living in Carrefour, and trying to survive each day.

How are you doing? I hope that everything is fine with you.Today we wake up with a strike in our country, and there are a lots of people who walk on foot in the streets because there are no cars.People are protested against the expensive life.This is a hunger crisis, the activities are paralised.I don't go to school today from that protestation fact, my school does work and it is the same thing for the others.

Currently i should get $ 225 HT to buy a bag of Rice that contains 8 canisters of Rice and the other stuffs are very expensive, the governement does not care about us, this morning there was an exchange between police and people.Some of the people who protest were thrown stones on a group of police officers and they reposted to the people with guns and gas.

I am not against the strike, we need an answer from our governement because food is unaccessible to buy such as it is expensive.We are having an expensive life, the president is remaining unmobil without saying what he's going to do or pretend to do.

Our goverment is not a serious gov and rather be a group of stealers.We are sufferring with an expensive life since a long while and we don't know how long we are going to stay with this problem.This is a worse period for this country that called during a certain time Beauty Of the West Indies ( the caraibe).

The prices are raised up everyday, we don't know what to do as a solution.We have different bad stuff in our system.If i had power to get the Media, i would talk against of this crazy governement cuz in this case i am very radical.I am working hard just to get out of this country, i beleive the solution of Haiti depends on God not Human being.I don't know for tomorrow if i will go to church, i hope all the students will have chance to go to school tomorrow.Things are fuzy to see.

My mom said hello to you.
Thank you very much.
Talk to you soon.
God bless you.

Witnesses said at least one person was killed by hotel security guards during a protest in the southern city of Les Cayes, where at least three people were killed Friday in food riots and clashes with U.N. peacekeepers. Police said they were investigating.

Thousands of people marched mostly peacefully past the National Palace in Port-au-Prince. "We're hungry," some called out. Others carried posters reading "Down with the expensive life!"

Haitians are particularly affected by food prices that are rising worldwide. Eighty percent of the population lives on less than US$2 (euro1.27) a day. The cost of staples such as rice, beans, fruit and condensed milk has gone up 50 percent in the past year, while the cost of pasta has doubled.

"Some can't take the hunger anymore," the Rev. Gerard Jean-Juste told The Associated Press. "As a priest, I encourage all government officials to do their best to find ways to solve the near-famine situation."

The U.N. World Food Program made an urgent appeal for donations Monday to support its operations in Haiti, the poorest nation in the Western Hemisphere. U.N. Secretary-General Ban Ki-moon warned last week that the food crisis could threaten Haiti's already fragile security.

Copyright © 2008 The Associated Press. All rights reserved.
Posted by John A. Carroll at 9:37 AM