With the Greatest Care and Love 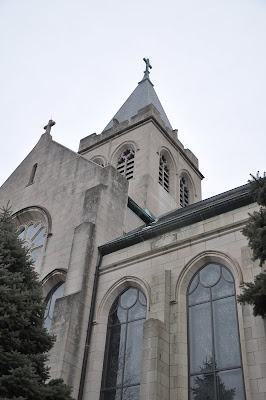 
The Peoria Journal Star had an article (advertisement) on the front page on Sunday. It was called "With the Greatest Care and Love".

The article provided a history of OSF from its beginning with the poor founding Sisters from Germany to the present day opulent medical center in Peoria.

Sister Judith Ann Duvall tries to assure Peoria that the Sisters are still in control of OSF through their governing boards. She is the chairperson of all the boards at OSF.

"We are deeply involved in the administration and governance of our health care system, and always will be," Duvall said, "because we came to religious life to give our lives to God by serving the sick, poor, injured, aged and dying 'with the greatest care and love.' "

The Journal Star article then quotes president and CEO of OSF-Saint Francis Medical Center Keith Steffen. One has to stop shaking one's head long enough to read all of Mr. Steffen's scripted quotes:

"The Ministry Development program started by the Sisters allows us to reinforce our heritage as a Catholic, faith-based organization throughout OSF HealthCare system, all seven of our hospitals and our other entities," said Keith Steffen.

Mr. Steffen, who is not Catholic but likes his Catholic pay check, continues:

"Ministry development helps us promote and protect our identity in a society that challenges our Catholic ethical religious directives. It encourages a role of advocacy for the underprivileged, disenfranchised, and the poor, much as our founding Sisters did," Steffen said.

Mr. Steffen, of course, stopped Haitian Hearts patients coming to OSF through a missive from OSF's legal counsel, Douglass Marshall. Haitian Hearts has now lost three young Haitians who were operated at OSF but not allowed to come back to OSF for repeat surgery ten years later. (Two other young OSF patients in Haiti are literally clinging to life right now. Both have been homeless during part of 2010 after the earthquake which occurred one year ago tomorrow. Both have been denied repeat heart surgery at OSF.)

But OSF did build their 280 million dollar Milestone Project during the last decade which includes a bright shiny new Children's Hospital of Illinois that is open to anyone-- unless one is an OSF Haitian Hearts patient.

So, I think OSF speaks with forked tongue with the Journal Star being their main messenger to the public.

OSF will change for the better some day. But it won't be tomorrow. OSF is embedded too well in Peoria and who wants to challenge the nuns? They can't be wrong, can they?
Posted by John A. Carroll at 6:38 AM