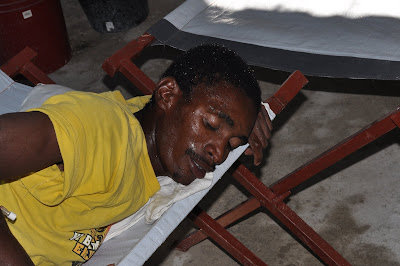 See this article from the Palm Beach Post about deporting Haitians back to Haitian prisons and their risk for cholera.

U.S. Immigration and Customs Enforcement (ICE) announced in December that this month, it would resume deportations to Haiti that were halted after the quake last Jan.12.

The first individuals scheduled to be deported are Haitians who had been incarcerated for crimes in the United States, were released and benefitted temporarily from the moratorium on repatriations after the quake.

According to the activists, about 100 such Haitians - many from South Florida - have already been picked up by immigration authorities and transferred to a holding facility in Louisiana before being shipped back.

ICE officials say that, according to law, the federal government can not detain such individuals for any significant time beyond their sentences. ICE then either must remove them from the country or release them back into the U.S. population, despite histories of serious crime.

The activists, however, say no Haitian should be sent back to their native country right now given the post-earthquake devastation and the political upheaval that has followed recent, disputed presidential elections.

"We ask President Obama to hold off on removing Haitian nationals from this country in light of the horrific conditions now facing our neighboring nation," said Howard Simon, executive director of the American Civil Liberties Union of Florida.

"It is within his power to show leadership and prevent a civil liberties and human rights disaster."

The cholera epidemic poses real dangers to criminal deportees, according to the activists.

Cholera struck Haiti last summer and by December 15 more than 2400 deaths had been recorded. At least 48 of those deaths occurred in Haiti's prisons, where cholera was first diagnosed in November.

"It is against Haitian law, but the deportees usually spend about two weeks locked up," says Michelle Karshan, executive director of Alternative Chance, a non-profit organization that works with former convicts. "And if they don't have family members to claim them they are detained indefinitely."

Karshan says cholera works particularly fast in Haitian prisons and jails where there is no clean water or food, inmates share squalid, unsanitary conditions and there is often little or no medical care.

"You get dehydrated quickly and without the proper medical care you can die in two to three hours from cholera," she said.

Steve Forester, Miami-based spokesman for the Institute for Justice & Democracy in Haiti, decried the pending repatriations.

"What they are doing is sending people to police station holding cells and prisons where cholera has already claimed at least 48 lives, where clean drinking water is not given or available and people can die from cholera in a day," Forester said.

"I am keenly aware of the devastation and the impact the present situation has on the constituents in my district and on their families in Haiti," Wilson said in a prepared statement.

"My Congressional district includes the largest Haitian population in America, so I am faced with the misery and the suffering on a daily basis."

ICE spokesperson Barbara Gonzalez said the flights repatriating Haitians are expected to start in mid-January, adding that resuming the deportations is " consistent with our domestic immigration enforcement priorities."

ICE officials say in 2011 they expect to send back to Haiti about 700 criminal aliens who have been convicted of homicide, kidnapping, sexual assault, aggravated assault, burglary, larceny, embezzlement, money laundering and extortion.

As for the health dangers posed to those being sent back, Gonzalez said that ICE was mindful of the issue.

"The Department of State has been working with the government of Haiti to ensure that the resumption of removals is conducted in a safe, humane manner with minimal disruption to ongoing rebuilding efforts," she said.

The activists say despite the serious convictions, the would-be deportees have stayed out of trouble since being released from prison.They said they would continue to pressure the Obama administration to change the policy before the repatriations begin.

Thursday, six human rights groups filed an emergency petition with the Inter-American Commission on Human Rights (IACHR), to halt the deportations. They include the Florida Immigrant Advocacy Center of Miami and the University of Miami School of Law.
Posted by John A. Carroll at 6:37 PM