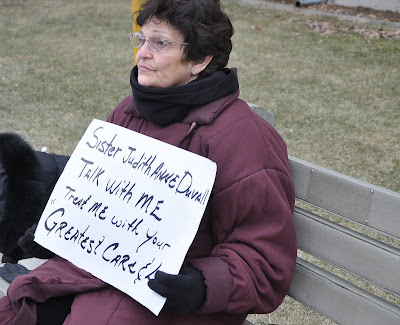 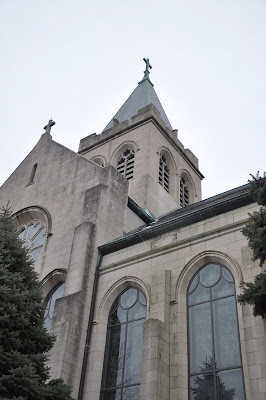 Leona Deemie, pictured above, states that she was abused as a child at St. Francis Hospital when she was hospitalized with polio.

OSF offered her $17,000 dollars and the gag order which would have prevented her from speaking about her abuse or the settlement.

When I talked with Sister Judith Anne about very important issues in 2001, Sister was unable to find the courage to talk with a nurse that would have told her the truth. I felt then, as I do now, that Sister was advised not to hear the truth because so many people at the top of OSF would be culpable.

So Sister is taking the same approach with Leona Deemie ten years later. Unfortunately, she listens to her counsel and not her conscience. And OSF is suffering greatly.

And so are OSF's Haitian Hearts patients who have been neglected by OSF and have died.

See this news report on what happened today.

Also, see Elaine Hopkins post today.
Posted by John A. Carroll at 5:13 AM

When I look at your coverage of Haitian Hearts over the years, I completely understand your passion and desire to see necessary medical care provided. However,given the dark history that is depicted in this poor woman's story,perhaps it is a true blessing that OSF can only find enough resources to provide quality medical care to serve the people of the Peoria area.

I realize the search for care must be difficult but that care really should be delivered by a health care institution that is a model of excellence. There is nothing in this woman's story or plea that suggests OSF was capable of providing good health care back then and nothing to suggest they are any more capable today. In fact, it appears that a crime was committed that went unchecked and unpunished.

You believe in OSF. I believe better care can easily be found elsewhere. During my father's inpatient stays in 2005, I witnessed a facility that is failing on too many marks to be a beacon of hope.

Sister Judith Ann is not only a nun but a nurse. You can only hide behind the habit so long before the issues you refuse to look at cross professional boundaries.

Who is Peoria's Medical Mafia anyway? Who is at the top of the pyramid? The nuns do not get absolution when they are running a multi-million dollar health care industry.

This past year we watched Kathleen Sebelius and Hiliary Clinton apologize to the people of Guatemala for our nation's horrific syphilis studies. Medicine can and does get just as ugly as organized crime. In fact, this was organized crime.

You can't lead an institution with the propensity for ugly that health care and medicine has and say you didn't know or didn't want to know what happened before, during, or after you came on board to lead.