Peoria has a Serious Problem 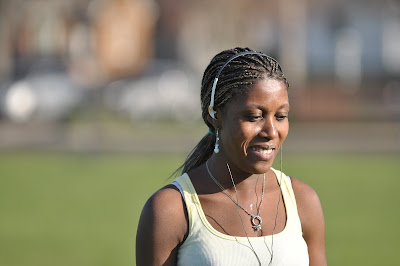 Several weeks ago I received a call from a lady at OSF. She works for the Charity Assistance Program.

The lady asked me only two questions: Was Heurese here on a “medical visa” and what institution accepted her for heart surgery. I anwered her questions right away but thought that her questions were unusual... especially the question regarding whether Heurese was here on a “medical visa”. I wondered what that had to do with Heurese’s request for assistance to obtain an echocardiogram.

I asked the lady from OSF if a decision had been made whether the Sisters would allow an echocardiogram to be done for Heurese through the Charity Assistance Program. She said that the decision had not been made and implied that Heurese’s straight forward request was still being reviewed. She was nervous and she seemed to want to get off the phone as quickly as possible. (I asked for her name before she hung up and she gave it to me.)

Last year Heurese was dying in Haiti. She gave away her children to family members as she prepared to die. I documented her status on this post and I wrote this letter and sent it to important people at OSF and the Catholic Diocese of Peoria.

I did not hear back from OSF regarding Heurese.

However, Haitian Hearts was able to provide Heurese with months of medication and were able to examine her in Port-au-Prince and obtain an echocardiogram ($75 US). She had a leaky aortic valve that had been repaired at OSF in 2002, but now the aortic valve needed to be replaced. She also had a hole in the ventricular septum, just below her aortic valve, that needed to be shored up because there was a leak across it.

Heurese was in congestive heart failure. Haiti had deadly food riots and four tropical storms in 2008 and Heurese was not eating much. She was quite thin, but had not given up hope.

Haitian Hearts moved Heurese to a guest house in the capital where she could eat every day and take her medication and just try and hold on.

Heurese did hold on and Cleveland Clinic Foundation accepted Heurese for heart surgery. We were able to renew Heurese’s Haitian passport, obtain a non immigrant visa, and purchase a airlines ticket for her to travel to the United States for heart surgery.

Heurese flew to Cleveland in December, 2008 and underwent heart surgery. She is doing great thanks to Cleveland Clinic and her host family in Cleveland.

However, the other day, as documented on Elaine Hopkins Peoria Story, I received this urgent e mail from the American Consulate in Port-au-Prince:

I have received an inquiry about a patient to whom we issued a visa on your request, Heuruse Joseph, dob 08-08-1978.

The visa was issued on Nov 24, 2008 and she was to have arrived for urgent heart surgery on Dec. 27. Your information informed us that a stay of two months was required and the visa was so annotated. She actually entered the US on Nov 27, 2008.

Did she in fact ever receive treatment through your program?

I have just received an inquiry from another hospital, in Peoria, stating that as of now she is applying to them for medical services.

Any light you can shed on the current situation would be appreciated.


I couldn’t believe what I was reading.

OSF had contacted the US Consulate again regarding Haitian Hearts patients. This time Heurese had been mentioned.

I answered the e mail from the Consulate official immediately and told her that Heurese had been operated in Cleveland and that her visa was up to date.

Heurese had documented in her letter to OSF’s Charity Assistance Program that she had been operated and all she needed was an outpatient echocardiogram in Peoria.

So why was the American Consulate confused after OSF contacted them about Heurese?

I asked the Consulate Chief who from OSF inquired about Heurese. The Consulate official responded that it was Douglass Marshall, OSF’s lawyer.

History was repeating itself here in Peoria to the detriment of Haitians suffering heart problems.

Several years ago Paul Kramer, Executive Director of Children’s Hospital of Illinois, notified the Consulate and asked them not to grant any more non immigrant visas for my Haitian Hearts patients to travel to OSF for care. And Mr. Marshall followed that with a certified letter to me that OSF would not care for any patient referred by me to OSF. And this included Haitian Hearts patients.

Since that time, due to OSF’s refusal to care for their Haitian Hearts patients, even with partial charges and full charges offered for their care, some young Haitian patients of mine have died, and others like Heurese have been suffering greatly.

But for Mr. Marshall to notify the Consulate regarding Heurese seemed quite cruel and unusual. Heurese's children are waiting for her in Haiti.

Heurese had survived poverty, heart disease, Haitian gangs, the UN forces, and four tropical storms. But it hasn't been easy for her.

Why would OSF’s Mr.Marshall call the Consulate regarding Heurese when Heurese made it very clear in her letter that she was operated and all she needed was a 15 minute outpatient echocardiogram? And OSF says that they refuse no one, so it should have been a no-brainer. Right?

Was Mr. Marshall worried that Heurese would not get her echocardiogram at OSF?
And does Mr. Marshall e mail other Consulates from around Central America when other patients with odd names apply to the OSF Sisters Charity Assistance Program? Has OSF become a branch of Homeland Security?

Peoria has a serious problem. Too many people are silent and afraid. They are afraid for their jobs and their health insurance and their status in the community.

The OSF Sisters need to be ashamed of their medical center's actions against Haitian Hearts’ patients. OSF’s ethicists and chaplains and doctors and nurses are cringing behind the scenes. Yet they say nothing in a public forum. If they all stood together, they could send a message safely and effectively.

And where is Bishop Jenky and the Catholic Diocese of Peoria? They are hiding as usual. Bishop Jenky fears OSF. So the hundreds of people that Bishop Jenky controls around the Diocese have to be silent also.

Several weeks ago while Cardinal George was appealing to President Obama to grant Temporary Protected Status (TPS) for illegal Haitians in this country, OSF's Mr. Marshall was notifying the US Consulate in Haiti that a poor Haitian lady was requesting a tiny amount of medical help here in Peoria.

OSF's actions and the silence that surrounds them is very dangerous--not only for Haitians but for all of us.
Posted by John A. Carroll at 1:14 PM

Thank you John for once again informing us of the injustice that takes place in Peoria. Your prophetic voice continues to be one calling for justice. It is hard to understand how the Church can proclaim the Gospel of Jesus yet remain silent midst grave injustices.

Yes, I agree, Peoria has a serious problem