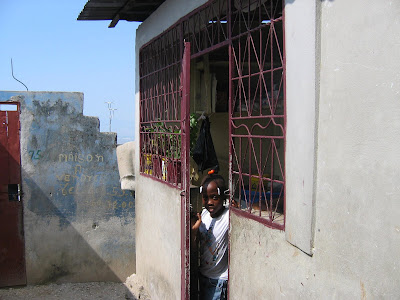 Thank you all for pulling and praying for Katina.

Katina is 14 years old and had surgery at OSF in Peoria in 2002. As the years passed, her mitral valve repair failed, and Katina slipped back into heart failure. She couldn't walk the hills of Port-au-Prince near as well because she was weak and short of breath.

With the support and love of Senator Mike DeWine and his family, Cleveland Clinic accepted Katina for heart surgery. Gertrude in Haiti fought through the visa application process, and Mary cared for Katina as she flew with her from Haiti to the States.

Cleveland Clinic did a wonderful pre-op workup to assure that Katina would have the best results possible.

The day before surgery Katina had a large double lumen catheter placed in a large vein and underwent an exchange transfusion so her blood would be healthier and able to withstand the rigors of bypass.

Katina talked with her courageous parents in Haiti the night before surgery and was very animated on the phone.

Yesterday morning Katina received a new mitral valve. And by late afternoon Katina was very alert, pointing to her breathing tube, while clearly indicating that she wanted it removed.

Many thanks to Katina's host families in Cleveland for having the heart, soul, and faith to bring her to this point.

Katina is not home yet, but will get there. We can't forget that even though she only weighs 66 pounds, she is Haitian.