Looking Back...Maxime is Dead and Katina Still Fighting for her Life in 2009 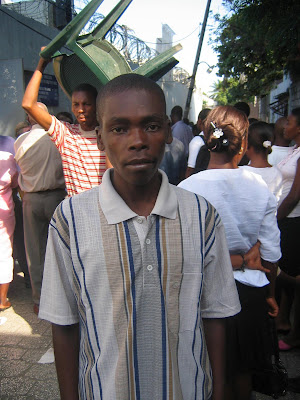 PEORIA - After four weeks in Haiti, Dr. John Carroll arrived back in Peoria on Tuesday night accompanied by six children and an adult, all needing medical care.

''All will be big-time challenges to Peoria's medical community,'' Carroll said. ''They are all surgical cases. These kids will get the care they need; I know they will.''

About 50 friends and supporters met Carroll and the Haitians at Greater Peoria Regional Airport. The Haitians will stay with host families while undergoing medical treatment.

Carroll, 48, of Peoria, is a founder of Haitian Hearts, a charity that brings children with life-threatening illnesses to Peoria and elsewhere in the United States for treatment they otherwise could not receive. He has won awards and visibility for his work with the Haitians.

A week before Christmas, however, Carroll was fired from his job of 21 years as a physician in the emergency department of OSF Saint Francis Medical Center. He said the dispute began over his push for more beds in the department.

St. Francis officials will not comment on the firing but have said the hospital's support for the Haitian Hearts program will continue.

Despite his firing, Carroll retains medical privileges at St. Francis, and he said Tuesday he will focus, for now, on overseeing care for the Haitians.

''My goal is to keep the kids healthy, improve them, get them back to Haiti,'' he said.

Carroll's mother, Mary, was among the group at the airport. She said several potential employers have attempted to contact her son recently.

Carroll said Tuesday he is still working on treatment plans for the Haitians. ''I would like to give Children's Hospital (of Illinois at St. Francis) the privilege of taking care of Haitian children.''

All the Haitians he brought back have either rheumatic heart disease or congenital heart problems.

He first met the 28-year-old, Yvel, three years ago. Yvel had rheumatic fever as a child and likely will need two heart valves replaced, Carroll said. ''He was hard to turn down after three years.''

Dr. Stephen Bash and his wife, Patty, were among the group meeting Carroll. Bash, a pediatric cardiologist, said he is scheduled to see three of the patients immediately.

''I'll find out tomorrow (what is wrong with them) and see if we can fix them,'' he said.

The newly arrived Haitians spoke no English and were weary and hungry after 12 hours of travel. Carroll said a nurse he knew from St. Francis happened to be on the same flight from Miami, and she helped with the children. They are Katina, 7, Cathia, 11, Stanley, 5, Jean, 5, Maxime, 16, and Jocelyn, 11.

Debbie Fischer of Benson brought the four children in her household, ages 4 to 16, to meet the Haitian child she will host. She has hosted others in the past and as a nurse can handle children with special needs.

Helen Martin of Eureka and her daughter, Sally Achterberg, a board member of Children's Hospital, brought homemade comforters and bags filled with small items for the newly arriving Haitians.

Martin said her church, Roanoke Apostolic Christian Church, funded the bags and made the comforters through its World Relief program.

Achterberg said she is serving on the Haitian Hearts Auction committee, an event scheduled for April 12. She hopes the auction this year will raise $100,000 for the program. It raised $60,000 last year.

''People are very generous,'' she said.

1. Maxime Petion, who was part of this group I brought to Peoria, was operated in Peoria in 2002. I took Maxime back to Haiti after he recovered from his surgery.

In 2006 while I was in Haiti, Maxime became sick again. He needed heart surgery. OSF refused him care along with all Haitian Hearts patients. He died at another medical center in the States in 2007 and is buried overlooking the Illinois River.

2. Katina, who is also referred to in this article, was operated at OSF also in Peoria. As documented on this blog in multiple posts, Katina is fighting for her life in Haiti now. She needs heart surgery again and, so far, I can't find a medical center for her. OSF is refusing her care too.


(Photograph of Maxime at the American Consulate in Port-au-Prince, Haiti. This picture was taken one month before he died in 2007.)
Posted by John A. Carroll at 8:03 PM