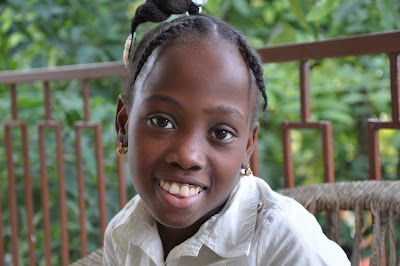 I would like to present the following as a formal ethics consult to you as Ethics Director at OSF.

Katina Antoine is a 13 year old Haitian girl who suffers from valvular heart disease. I brought her to OSF in Peoria in 2002 as part of the Haitian Hearts program.

She underwent mitral valve surgery at OSF and recovered at my brother’s home in Peoria. She attended St. Thomas Church with my brother's family and St. Thomas School sends a yearly monetary gift to Katina which pays for her school in Haiti.

I have been following her in Haiti since I took her back in 2002.

I examined her in November, 2008 and obtained an echocardiogram. Her physical exam and echocardiogram revealed that Katina needs a new mitral valve. The repair done on her mitral valve at OSF in Peoria gave her a couple of years, but she now needs a prosthetic valve placed in the mitral position.

As you may know, complex technical heart surgery such as this is not done in Haiti.

Several years ago a letter from Douglass Marshall, OSF attorney, informed me that OSF would not operate on any patient referred by me to OSF. This included Haitian Hearts patients.

Two of OSF’s young Haitian Hearts patients, Jean-Baptiste and Maxime, have died very painful deaths in the last couple of years after being denied care at OSF.

I am afraid that Katina is running short on time.

The Catholic Post recently quoted you regarding your belief and reliance on the Ethical and Religious Directives regarding Catholic health care in the United States. I would hope that you and the Ethics Committee would review these Directives with Attorney Marshall and OSF’s Administration so their policy denying OSF’s Haitian Hearts patients care would be changed immediately.

OSF's leaders in Corporate and at the Medical Center need to come together to give Katina the concern and the care she deserves in Peoria.

Since 1995, Haitian Hearts has donated over 1.1 million dollars to Children’s Hospital of Illinois. We are able to pay up to $10,000 dollars for Katina’s care at OSF.

I have sent you this letter via “snail mail” since my OSF e mails have been blocked in the past. I did not think that you would receive my request any other way. (I did leave a voice mail on your phone the other day, but did not hear back from you.)

Also, I have published this letter on my web logs, www.dyinginhaiti.blogspot.com and www.pmmdaily.blogspot.com. Also, these two sites will provide you with an adequate historical background regarding OSF’s negligent and unethical behavior regarding Haitian Hearts patients.

I will publish your response regarding this consult in a future post. As Katina’s physician and guardian in the United States, I will also share this post and your response with Katina’s parents in Port-au-Prince, Haiti.

Physicians are supposed to be “attorneys for the poor”. My hope is that you will be an “ethicist for the poor”. Katina and her family are indeed poor.

Haitian Hearts fervently wishes that you and the Ethics Department at OSF will have the courage to convince others at OSF that accepting Katina is the only good ethical decision that can be made.