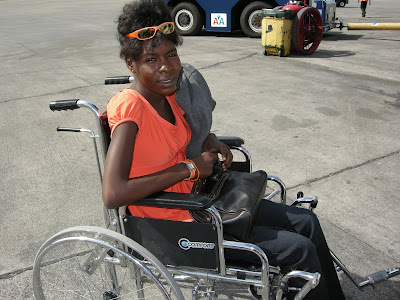 Well, our young 16 year old girl Mirterlande made it through surgery. She is up and walking and acting like nothing happended. She will be discharged from the hospital today. (See Maria's description of Mirterlande's saga on Live from Haiti.)

The tiny muscles and tendons that support her mitral valve in her heart were all “scrunched up” (medical term) and destroyed from her previous rheumatic fever. As these muscles became distorted over the last few years, the valve leaflets also were injured and the leaflets did not open and close the way they were designed. So with each beat of her heart, blood was regurgitating up into her lung and then, when the heart rests in diastole, too much blood would rush down into her left ventricle which caused it to swell and become weak.

Clinically, because of the above scenario, Mirterlande was barely able to walk because she was in congestive heart failure. When Haitian Hearts first examined her two years ago in Haiti, she was much more robust appearing. She has lost alot of weight due to cardiac cachexia. And she survived a month in the General Hospital in Port-au-Prince earlier this year when she was critically ill and treated for severe heart failure.

Her mother lives in the Artibonite Valley in Haiti and could not provide care for her. The tropical storms washed away her mother's garden in the Valley. So Mirterlande was living in Port-au-Prince with her older sister Karmin who saved her life multiple times during the last couple of years.

Many thoughts rush through my head each time I see one of my Haitian patients asleep on the operating table in the US. I think of all the suffering they have had. I think of what all their families back in Haiti have been through just to keep them alive. When a family member is sick in Haiti, the entire family is stressed. A cow may need to be sold and other family members need to do without.

In the hospital this week, the surgeons and heart surgery team in the operating room worked as a family to save Mirterlande’s life. They have worked for decades together and made a very difficult surgery look routine. The perfusionist, anesthesiologist, and surgeons are constantly talking to each other about the patient’s status during the case. There is no radio playing music, no one is listening to the city council chirp in the background, and there is no idle talk in the operating room.

All eyes and thoughts were on Mirterlande lying in the middle of the cold room.

After surgery, as Mirterlande was wheeled down the hall adjacent to the operating room, in a seamless fashion the cardiovascular intensive care team took control from the operating room team. They are all professionals and know how to troubleshoot any problem that may arise in the early hours after surgery.

In reality, Mirterlande had to wait too long in Haiti for this surgery. And she should have been able to have this surgery in Haiti by Haitian physicians.

And if I really want to be honest, Mirterlande should not have got rheumatic fever in the first place. But poverty breeds diseases like this that steal away young people like this one. However Mirterlande so far has cheated poverty out of another innocent victim.
Posted by John A. Carroll at 9:19 AM