Bob Rosa is the owner of Central Illinois Gym on South Adams in Peoria.

It is the best weight lifting gym in Peoria.

Bob tells it like it is and so do the members that work out there.

Big strong guys come in after work, cajole and taunt each other in typical locker room style and they scream bloody murder as they hoist huge weights above their heads.

The best weight lifter in the world in the 1980’s, Mike Bridges, is a member and he is still very strong.

I spotted bench for a guy named Frank a couple of years ago. He did 13 perfect reps with 405 lbs. And this was after he benched 500 lbs.

Interestingly, when the big guys inch towards 600 lbs. on their bench, they quit talking about it. They don’t want to be held to this number each time they stroll in off Adams street.

There are people with all sorts of backgrounds in the gym but no one has any enemies…at least in the gym. Yes, these big strong guys gossip some, and many seem to have women problems, but the weights take their mind off of some of their concerns outside the gym.

And the big strong weight lifters in the gym know the score about politics, the war, about unions, and about forces that control society. 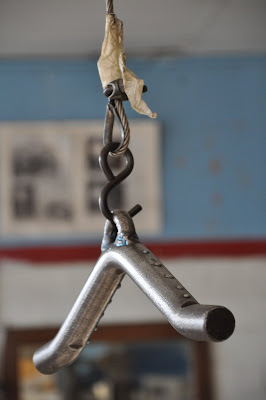 They don’t read the New York Times or get on the Huffington Post website every day but they still know the score.
Posted by John A. Carroll at 6:30 PM