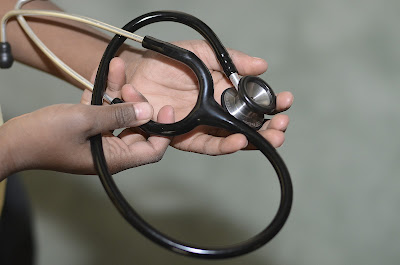 Last year, while working at Hopital Lumiere in Bon Fin, I examined a number of patients with heart problems.

One of the heart patients was three year old Charles. He had a loud systolic murmur over his upper left sternal border and he was anemic.

I sent Charles and his mother to Port-au-Prince with a check from Haitian Hearts to obtain a formal echocardiogram.

Charles echo showed that he has severe pulmonary stenosis with a gradient across the valve of 80 mm Hg. This valve could be opened in the cath lab with a balloon or, if necessary, by an open surgical procedure to expand the valve area.

Naika had a loud "wash machine" type murmur all over her chest. Her chest x-ray revealed a large heart due to too much blood circulation through a large congenital heart defect called "patent ductus arteriosus".

Haitian Hearts sent Naika to the capital too and her echocardiogram confirmed this diagnosis. Her lesion could possibly be closed in the cath lab as well, or she could have an open procedure without needing bypass. But she definitely needed a procedure because she is in volume overloaded heart failure.

So now what was I supposed to do?

Both of these kids are good surgical candidates and both deserve surgery. But they live deep in rural Haiti, have no money, and OSF administration in Peoria definitely will not accept these kids from Haitian Hearts. Charles and Naika are not covered by OSF's Catholic Mission Philosophy even though it states that OSF will turn no one away regardless of race, religion, or ability to pay. (Haitian Hearts would offer $10,000 for each case.)

So I wrote their names down on my Haitian Hearts "master list", brought their echocardiograms and chest x-rays back to Peoria with me, and kept my eyes and ears open for medical centers that may accept them.

Amazingly, this spring, Chadasha Foundation contacted Haitian Hearts and asked if we had any Haitian kids that needed heart surgery! We always have a "bunch" of babies, toddlers, kids, teenagers, and young adults who need surgery.

Well, Charles and Naika, are on their way this week to the Dominican Republic for heart surgery.

Many thanks to Angela, Chris, Clint, Judy, Gettie, and Miss Beth for helping make this happen.
Posted by John A. Carroll at 2:59 PM