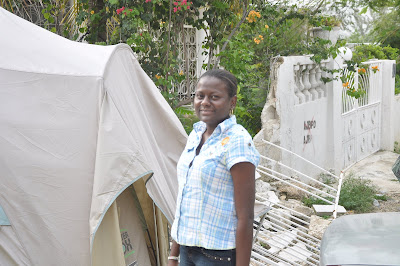 During the last decade we have examined Jenny in Hati many times, evaluated her Haitian echocardiograms, and supplied her with medication.

Jenny needs repeat heart surgery now because her valve repairs done at OSF need to be revised. Jenny is in congestive heart failure now and managed with medication.

I have looked for several years for a US medical center to reoperate Jenny but cannot find a center that wants to accept Jenny. They all feel that Jenny is OSF's ethical and medical responsibility.

On January 12 of this year Jenny was seated at her desk on the fourth floor of the bank where she works in Port-au-Prince. She heard a loud noise and the bank began to shake back and forth.

Her friends and fellow employees ran down the stairs and out of the building but Jenny sat frozen in fear at her desk. She said that her legs would not work.

Several minutes later, after the shaking had stopped, her friends ran upstairs and grabbed her and led her down the stairs. No one was hurt at the bank and the building suffered no major damage.

Jenny had to walk home not knowing whether her family survived the quake. As she walked down the dark streets, Jenny heard many people screaming trapped in buildings and saw dismembered extremities lying in the streets. Bodies were everywhere.

Jenny did not know it at the time, but 140,000 of Haitian brothers and sisters had just died during the violent 45 second earthquake, and over the next month, the mortality would rise to an estimated 230,000.

She arrived home three hours later and found her family to be fine, but the walls of her house were cracked and her house was not safe to live in.

For the next few months after shocks continued and Jenny and her sister slept in a small abandoned car near her house. After a small tent was donated to them by Rotary Club, they started living/sleeping in the tent.

Jenny kept going to work through all of this upheaval and was able to do this in congestive heart failure.

Jenny's history and exam now is not good and she needs surgery soon.

Sister Judith Ann, Mr. Steffen, and Mr. Marshall, if you will open your arms once again for Jenny, Haitian Hearts will pay you $23,000 dollars again, we will get her Haitian passport renewed, we will obtain her US visa to travel to Peoria, we will purchase her roundtrip airline tickets, Jenny can live with us in Peoria, and we will continue to provide her with medication post operatively.

I plead with you to follow OSF's founding Sisters Mission Philosophy. Jenny has survived the earthquake. Please give her another chance with her heart.

John Carroll
Posted by John A. Carroll at 8:59 AM