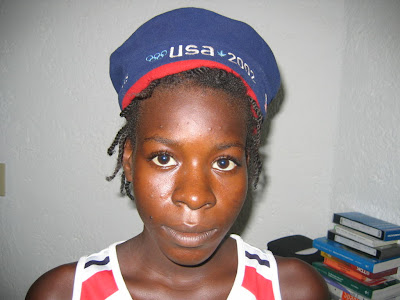 The young girl pictured to the right is Mirterlande. I took this picture in 2006.

Haitian Hearts first examined her during the fall of 2006. She clearly had a damaged mitral valve due to rheumatic fever and was in congestive heart failure.

We were able to bring her to the United States at the end of 2008 where she underwent mitral valve replacement by and excellent surgeon at an excellent medical center. Mirterlande is doing very well today.

Mirterlande is from Haiti's central plateau. She told us that she had been hospitalized as a child at Hopital Albert Schweitzer (HAS) for heart problems.

HAS was founded in the mid 1950's by Dr. Larry Mellon and his wife Gwen Mellon. They built the hospital for approximately 1.5 million dollars with their own money.

I had the opportunity to transport a patient to HAS in 1981. My patient was a little 5 year old boy that had fallen off a donkey, struck his head, and was leaking cerebrospinal fluid from his fractured skull.

HAS accepted the little boy and the pediatrician placed him on antibiotics. I begged this physician to send me follow up. Several months later I received a letter from this Haitian pediatrician who told me that the little boy survived, did well, and was discharged.

In 1987 I was able to work at HAS from July until November. It was the best medical experience of my life. Dr. and Mrs. Mellon were elderly at that time but still lived close to the hospital and were very involved in the daily operation of the hospital.

My friend David Volk and his wife Dr. Lauze Volk worked at HAS ten years ago. David sent me the following post written by Ian Rawson. Mr. Rawson is the son of Gwen Mellon. The lady he refers to in the post is his mother.

Each day I try to go through the hospital several times in the early morning, during the day and in the evening. I try to encourage the people who are waiting for surgery and their families, and then to check on the progress of those who are recovering from their procedures. I have become quite close to several of these strong people, and our visits buoy the spirits of both of us.

We have never asked people about their experiences in the earth quake, but some now want to be able to express themselves about the disaster. One of my special friends is an elderly lady who has required two surgical procedures, with her leg in traction between them. She has endured pain and discomfort with strong perseverance (that's the word she used). She has a beautiful smile, which she usually shares with me each time I visit. If not, I know that she is suffering.

Once, when I went to see her, the bed was gone, but her son, who has not left her side, indicated that he wanted to talk, so we went out the ward door to a breezeway, and sat on a concrete bench. His mother comes from a small community on the north side of the Artibonite River. She had come in to Port Au Prince with her family to prepare for the daughter's wedding. When the quake hit his mother was buried in the rubble of a 3-story apartment building.

Miraculously, her sons found her and carried her to a nearby house. One of the sons drove to three hospitals to seek help for her broken leg, but he only found bodies of people which had been carried there by distraught families. The son returned to report to his mother, who was coming out of the initial shock of the quake. She told her children to take her home. Why? They asked, and she told them about the hospital across the river where she had gone when they were young, to have an operation.

The sons drove around buying gasoline, for which the price had doubled, and started on the road to Deschapelles and Hôpital Albert Schweitzer. On the way, she told them about the hospital and the American woman who visited her every day.

I met her the day after she arrived, when she stopped me to ask me when she would have her operation. We talked a while, and she asked if the American lady was still there and I explained that she was not, but as the American lady was my mother, she had taught me how to care for our patients. That earned me the first of her beatific smiles.

She said that she will be my Mami, and I am honored with the relationship.

Later today, she will have her second operation and will be on her way to recuperation, and I am certain to be graced with another of her smiles.