Not All Bad Behavior is Actionable.... 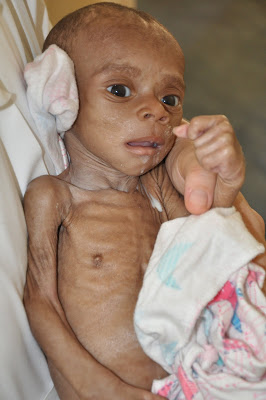 Peoria's OSF/SFMC behavior towards their Haitian Hearts patients was again abysmal in 2009.

OSF/SFMC is denying medical care to two patients, Jenny and Henri, both who had heart surgery at OSF/SFMC ten years ago. They both need repeat heart surgery. Both are in Haiti and both receive medications and exams from Haitian Hearts year after year.

They both have hope to stay alive. But where is the hospital in Peoria that "turns no patients away"?

A couple of days ago I received a comment on this blog.

The commenter was a local Peoria blogger who actually signed his name.

The fact that the blogger/commenter signed his name was unusual...most comments are made anonymously because people fear OSF.

Who knows if that was true or not, but that was the comment.

I was really surprised that this person actually signed their name.

However, by the next morning, the blogger/commenter had removed the portion of their comment which regarded OSF's poor care.

Thus, another blogger/commenter thought twice about going after OSF with their name attached. Fear of OSF had won out again.

In this blog I have documented how Keith Steffen, OSF's Administrator, told me that fear is a good thing among OSF employees. I clearly documented how he intimidated two of his nurses in his office at OSF.

I have spoken with many people in the Peoria community during the last decade who genuinely fear OSF and Mr. Steffen. Even a huge benefactor to OSF won't come out against Mr. Steffen in attempts to have him replaced because she fears for her own medical care at OSF/SFMC.

Is this the way a Catholic hospital (or ANY hospital) should act?

Numerous members of the Peoria community fear losing their job and their health insurance if they go after OSF. Our business boards are related and when you go after one business you go after all of them.

And to make matters even worse for OSF/SFMC, this year their legal counsel Douglass Marshall contacted the US Consulate in Haiti regarding a Haitian Hearts patient receiving medical care in Peoria. Many people knew about Marshall's action, but they did nothing.

For good reason they fear OSF.

The seven remaining OSF Sisters that live in the massive convent near the hospital don't walk with a bounce in their step. They know all this is happening, but have lost their mission and their spirit and their will to stop the fear engendered by OSF's secular leaders.

How sad for OSF and for Peorians.
Posted by John A. Carroll at 7:57 AM