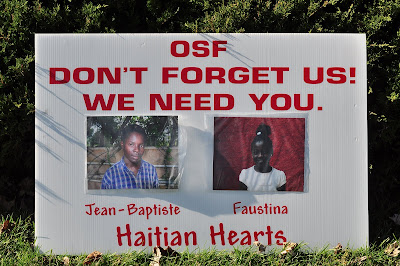 Yesterday, while cleaning, I found this poster.

Haitian Hearts and Peoria Area Peace Network carried this poster in 2005 in front of OSF-SFMC as we protested OSF's discriminatory and dangerous policy against Haitian Hearts patients.

My wife and I took care of both of these young people in our room in Haiti. Jackson was with us for one month in cardiogenic shock and heart failure. Faustina had severe heart failure.

OSF did not answer repeated requests to save their lives.

Haitian Hearts was able eventually to get both Jackson and Faustina accepted into other medical centers in the United States.

However, it was too late for Jackson. Jackson Jean-Baptiste died a slow and very painful death in January, 2006. He is buried in Goodfield, Illinois.

However, Faustina was operated and did very well. She is a happy thriving teenager today.

Other OSF patients are sick in Haiti. I examine them and we provide them with their heart medication. They need surgery and will die without it.

OSF does not answer when contacted about their current sick Haitian patients. The Ethics Department does nothing. And The Catholic Diocese of Peoria remains silent.

As OSF continues to expand with their one-half million dollar Milestone Project, OSF continues their deadly policy against innocent Haitian Hearts patients as 2009 comes to a close.
Posted by John A. Carroll at 10:30 AM