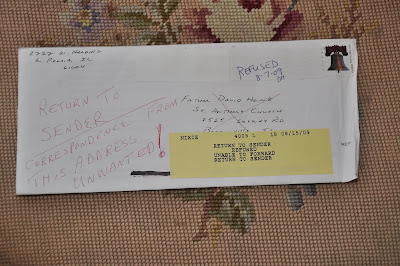 During the last two weeks, my brother and I have sent out over 200 letters. The letter went to all of the pastors of all of the Catholic parishes in The Diocese of Peoria. Bishop Jenky, OSF "leaders", and The Catholic Post of Peoria were also recipients. (The letter is published at the end of this post.)

The letter is very self explanatory and explains the OSF contraceptive policy created in the mid-90's in Peoria. OSF's new purchase, OSF Medical Group--College Avenue in Bloomington, Illinois, will use this unfortunate policy to allow their 40 new OSF physicians to prescribe oral contraceptives. This is, of course, against the teachings of the Catholic Church.

In response to the letter we have received remarks from different pastors wondering how are they going to explain this scandal to their parishoners. And they have called OSF's oral contraceptive policy "disturbing". Even OSF Corporate Ethicist Joe Piccione explained to me that this policy that he helped create is "regretable" and also stated, "We are mourning this policy."

Joe and OSF may be mourning the policy but 40 new OSF physicians are getting ready to use it.

When we sent the letters out we were worried that some priests may not even open their letter out of fear.

Today I received an unopened letter from Father David Heinz, Pastor of Saint Anthony's in Bartonville, Illinois. The photo of the letter is above.

Father Heinz appeared to have written in red ink that he will receive no correspondence from my address. Our names were not on the return address.

I have never met Father Heinz and I think he probably has many good qualities. I just think it is very painful for him and for many other priests in the Catholic Diocese of Peoria to witness their Bishop give into the secular/economic forces at OSF.

Father Heinz and the other pastors have watched as Haitian Hearts patients have been denied care at OSF and have died. As OSF continues with their hypocrisy Father Heinz probably does not want to know about it, and may well have been instructed not to read the letter. The Catholic Church is not a democracy and the priests must be obedient to their bishop. We just wish Bishop Jenky was leading his priests and flock the right way.

I fully believe that OSF controls much of what The Catholic Diocese does. When I spoke with Bishop Jenky in person, I could see how much he feared OSF's power and money.

And we can't forget that Father Heinz gets his paycheck and health insurance from the Diocese.

We feel sorry for Fr. Heinz and will continue to pray for him.

Here is the letter Fr. Heinz returned to us.


Are you aware that another OSF medical facility will soon be prescribing oral contraceptives? This letter concerns OSF HealthCare’s recent acquisition of Carle Clinic in Bloomington, Illinois. Please refer to the article in the July 12, 2009 issue of The Catholic Post for details of the acquisition.

At Mass on Sunday July 19, our pastor announced the month of July was designated Natural Family Planning Month by the US Conference of Catholic Bishops. The bulletin stated, "NFP is a completely Church-approved alternative to contraception and sterilization." The bulletin also stated: “The Church condemns artificial contraception not just because of its bad consequences. She condemns artificial contraception because it is intrinsically evil (and because it is evil it has bad consequences.)"

For many years, OSF has had a policy called "limited private practice.” This policy allows OSF physicians to write prescriptions for oral contraceptives. For the few seconds it takes to write the prescription, OSF physicians are not considered to be OSF employees. This contrived change in employment status is how OSF justifies allowing their physicians to prescribe oral contraceptives despite the fact that the physicians are in an OSF office building and are still being paid as full-time employees.

Last week OSF Corporate Ethicist Joe Piccione, when contacted by phone, said that he did not know if the physicians presently employed at Carle Clinic in Bloomington will become employees of OSF. However, a representative of Carle Clinic, contacted by phone, said the approximately 40 physicians at Carle would be OSF employees and that they would be able to prescribe oral contraceptives.

It does not take a theological degree to see the grave moral contradiction in permitting employees to prescribe oral contraceptives while saying, “They are not our employees when writing those prescriptions.” OSF should change their policy to prohibit their employees prescribing oral contraceptives rather than allowing it. The limited private practice policy should not be allowed to be placed into effect in the newly acquired OSF clinic anymore than it should be allowed to continue anywhere in the OSF HealthCare System.

The transition from “Carle Clinic” to “OSF Medical Group – College Avenue” will occur on September 13. The OSF policy is obviously not supportive of Humane Vitae and respect for life. Please, after prayerfully considering this matter, advise Bishop Jenky that you disagree with OSF’s policy and advise your parishioners to do the same. Ask Bishop Jenky to reverse OSF’s contraceptive policy. It is important that you act soon since the policy will be harder to reverse once it is put into effect.

Tom Carroll
Posted by John A. Carroll at 3:18 PM