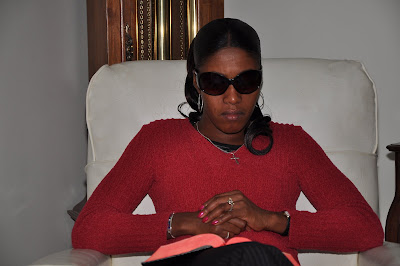 Heurese went back to Haiti yesterday.

She is back in her one room shack with her two kids and her brother in a massive slum named Carefour.

During the last 12 months Heurese survived:

Extreme poverty with very little food and water for herself and her kids;

Peoria's OSF refusal to accept her back for heart surgery;

The silence of The Catholic Diocese of Peoria, the OSF Sisters and OSF Administration, and the Children's Hospital of Illinois Advisory Board who were notified last year that Heurese would die without surgery;

The Haitian government that provides next to nothing for sick people like Heurese;

Giving her children away while she waited to die in the Haitian slum;

OSF's Charity Assistance program who refused to do a post operative outpatient echocardiogram for her, but instead had OSF's attorney Douglass Marshall contact the Amercian Embassy in Haiti and request classified information on her visa status;

The pleas of her family in Haiti who told her NOT to return to Haiti now because life is almost impossible.

And to make things even worse for the hypocrisy in Peoria, the July 7 issue of The Catholic Post in Peoria had articles on Pope Benedict's encyclical "Caritas in Veritate" (Charity in Truth).

The pope's main concern in his encyclical is the dignity of the human person.

My family and I have never seen anyone with more dignity than Heurese....a dignity that was totally ignored by Peoria's spiritual and secular leaders.

Joe Piccione, OSF's Corporate Ethicist, who turned his back on Haitian Hearts patients too, called the encyclical "beautiful".

"The new encyclical states that ethical values are needed to overcome the current global economic crisis as well as to eradicate hunger and promote the real development of all the world's peoples.

"The truth that God is the creator of human life, that every life is sacred, that the earth was given to humanity to use and protect and that God has a plan for each person must be respected in development programs and in economic recovery efforts if they are to have real and lasting benefits, the pope said.

"Charity or love is not an option for Christians, he said, and "practicing charity in truth helps people understand that adhering to0 the values of Christianity is not merely useful, but essential for building a good society and for true integral development.

"In addressing the global economic crisis and the ending poverty of the world's poorest countries, he said, "the primary capital to be safeguarded and valued is man, the human person in his or her integrity".

"The global dimension of the financial crisis is an expression of the moral failure of greedy financiers and investors, of the lack of oversight by national governments and of a lack of understanding that the global economy required internationally recognized global control, Pope Benedict said.

"The pope also said that "more economically developed nations should do all they can to allocate larger portions of their gross domestic product to development aid," respecting the obligations they made to the U.N. Millennium Development Goals aimed at significantly reducing poverty by 2015.

"Pope Benedict said food and water are the "universal rights of all human beings without distinction or discrimination" and are part of the basic right to life.

"He also said that being pro-life means being pro-development, especially given the connection between poverty and infant mortality, and that the only way to promote the true development of people is to promote a culture in which every human life is welcomed and valued."


It seems to me that the OSF and The Catholic Diocese of Peoria is not promoting a culture where every human life is welcomed and valued.

As mentioned above, OSF's Coroporate Ethicist Joe Piccione commented on the "beauty" of this encyclical in another article in the same issue of The Catholic Post.

"He (Pope Benedict) is speaking to the conscience of the world. What is possible when human persons interact for the common good."

I spoke to Joe on the phone recently about OSF's abandonment of their Haitian Hearts patients. I asked Joe what Pope Benedict would say about this abandonment.

Joe's response was that he thought that Benedict would say that barriers need to be broken down to allow these Haitian kids to return to OSF.

I reminded Joe that OSF and their attorney Douglass Marshall had banned all Haitian Hearts patients from returning to OSF. (Joe told me that he was unaware of this.) I also reminded Joe again that my Haitian patients were suffering and dying with this policy of patient abandonment.

Therefore, it seems like the first barrier to be broken down at OSF would OSF's embargo against my Haitian kids.

Another barrier that could be broken down would be the "fear barrier". Mr. Steffen, OSF's Administrator, told me that fear at OSF is a "good thing" among OSF employees. If this barrier were broken down, the OSF International Committee could speak up for the Haitian Hearts patients like Heurese that need to come back to OSF and OSF's ethicists could act in the Haitian patients' best interests. (The OSF-SFMC ethicist has not responded to three different requests for help with Haitian Hearts patients.) This barrier of fear working against Haitian kids is significant.

So I do agree with OSF Corporate Ethicist Joe Piccione that Pope Benedict's encyclical is beautiful and that barriers do need to be lifted at OSF in Peoria to prevent Haitian kids from dying.
Posted by John A. Carroll at 4:41 PM