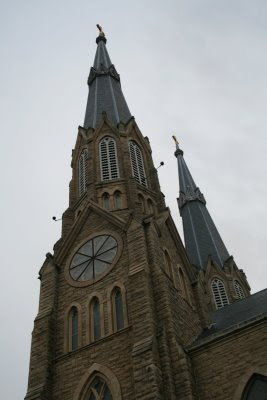 I believe that Bishop Jenky was probably a much happier fellow at University of Notre Dame (UND). And I think he would go back to South Bend in a minute.

When I met with Bishop Jenky in his Chancery office in Peoria in February 2003, I felt like I was talking to a man who was very afraid.

I thought he was afraid of Peoria’s local politics.

I thought he was afraid of OSF and Caterpillar Inc., Peoria's largest employers.

I thought that he was afraid for the financial future of the Catholic Diocese of Peoria.

I thought he was afraid to support dying Haitian children.

And even though Bishop Jenky threatened me in the Chancery, I thought he was angry at himself and others, not at me.

I had picketed OSF in January, 2003 after OSF had notified the American Consulate in Haiti. This action stopped my Haitian patients from coming to OSF in Peoria for medical care and cost some of them their lives. The sign I carried in front of OSF questioned OSF's respect for life.

OSF needed to get Bishop Jenky involved because OSF was causing a public relations nightmare. They saw no way out without Bishop Jenky at their side.

At that time I did not know that OSF had a contraceptive accommodation or that Bishop Jenky was going along with OSF’s policy of allowing OSF physicians to write prescriptions for oral contraceptives. This policy had been approved under Bishop John Myers in the mid-90's. Bishop Jenky had inherited this local scandal, and behind the scenes, was allowing it to continue to flourish to help OSF's pocketbook. It was simply money over morality.

According to Catholic teaching, OSF’s contraceptive policy and Bishop Jenky’s acquiescence are not pro-life. My sign questioning OSF's respect for life for Haitians hit them harder than I expected.

So what has happened at OSF and with Bishop Jenky since I picketed the hospital in 2003?

Some of my Haitian kids have died. And OSF is still contacting the US Consulate in Haiti and Cleveland Clinic in Ohio regarding confidential information about my Haitian patients that they have no right or need to know. Bishop Jenky remains silent about this.

OSF’s contraceptive practice continues, and Bishop Jenky maintains his silence regarding this too.

Bishop Jenky is a Fellow and Trustee at the University of Notre Dame (UND). Any comments he had regarding the UND scandal allowing President Obama to give the commencement address was kept below the media radar.

And since 2003 I have learned much about how dysfunctional the Church hierarchy really is.

Is Bishop Jenky conservative or liberal? It totally depends upon where the money is.

Trying to stop President Obama from speaking at UND would not have been good for Bishop Jenky, so he took a silent, safer, and liberal approach.

And he took a conservative approach with his public silence regarding OSF’s abandonment of Haitian Hearts patients. What OSF is doing, allowing their Haitian kids to die, is against moral and ethical standards, and Bishop Jenky has said nothing in the media. (If he is talking to OSF privately, it isn't working.)

As mentioned above, Bishop Jenky has been silent about OSF’s contraceptive practice, which obviously would be a liberal approach. I wonder how much OSF contributes to the Diocese?

His "flip-flop" approaches are consistent only in that they do follow the money each time.

Cardinal Francis George, who is also president of the U.S. Conference of Catholic Bishops, was described by George Weigel as “one of the most articulate critics of Notre Dame’s decision to honor a president who manifestly does not share what Notre Dame claims is its institutional commitment to the Church’s defense of life.” Interestingly, Cardinal George requests Temporary Protected Status for Haitians.

Cardinal George's statements in Chicago seems world's away from what is happening just down the interstate from him in the Catholic Diocese of Peoria.

In conclusion, quoting from a pro life friend of mine who quotes from this link:

To hearten and encourage us all, when we find ourselves confronting bishops, archbishops, and even cardinals:

Laypeople are not merely the clergy's collaborators, but rather share in the responsibility of the Church's ministry, says Benedict XVI.

"There should be a renewed becoming aware of our being Church and of the pastoral co-responsibility that, in the name of Christ, all of us are called to carry out," the Holy Father said. This co-responsibility should advance "respect for vocations and for the functions of consecrated persons and laypeople," he added.

The Pontiff acknowledged that this requires a "change of mentality," especially regarding laypeople, shifting from "considering themselves collaborators of the clergy to recognizing themselves truly as 'co-responsible' for the being and action of the Church, favoring the consolidation of a mature and committed laity."

The Bishop of Rome suggested that "there is still a tendency to unilaterally identify the Church with the hierarchy, forgetting the common responsibility, the common mission" of all the baptized.
Posted by John A. Carroll at 2:01 PM