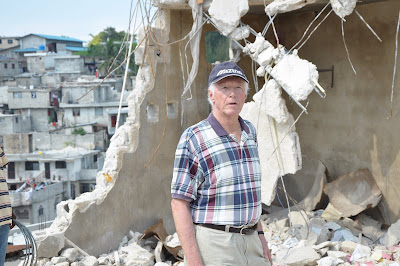 My father-in-law, Ed King, and I traveled to Haiti in mid-November. We went down to transport two young women in the Haitian Hearts program to the United States for heart surgery.

This was Ed’s second trip to Haiti. We stayed at a guest house in Port-au-Prince, the capital of Haiti. Port-au-Prince has an estimated population of 3,000,000.

The first morning Ed looked at me, chuckled, and said, “We are surrounded by walls.”

Ed had surveyed the neighborhood that morning. And he was right. There were walls everywhere.

The top of the walls that surround private homes in Haiti have broken glass and razor wire embedded in cement. One would really have to want to get inside the walls to run the risk of going over top.

One midnight in 1969, Ed was awakened and emergently summoned to the Bradley Student Center. He quickly walked from his home which was just off campus and learned that students had taken over the Student Center.

African-American students were inside the Student Center and demonstrating against a university tuition increase. The Peoria Police were there and electricity had been cut to the building. Spotlights were shining and the police and their dogs were ready.

After several hours of negotiations, the students left the building. Ed had confronted a disaster waiting to happen. No one was hurt.

Ed travels the country now and gives workshops on “constructive confrontation” which is about effective communication between people. The formidable walls in our neighborhood in Haiti’s capital startled him since he has spent most of his adult life trying to tear down walls.

Later that first morning in Haiti we piled into a pickup and traveled south and east of Port-au-Prince to an elite suburb called Petionville. We wanted to visit the site of La Promesse, the school that had collapsed suddenly one morning in early November.

This tragedy had riveted the world’s attention on Haiti and its courageous people.

The UN soldiers in Haiti dug through the rubble. International disaster experts were flown in. Pope Benedict sent his condolences. The world seemed to care about these Haitian students and their families.

When we arrived at the site, a small contingent of UN forces from Jordan was walking up the street from the collapsed three story building.

A big empty spot was apparent on the side of the street overlooking a steep ravine. About 30 Haitians were milling about on top of broken cement, rubble, and twisted rebar. Many were staring down into the ravine. Most people were quiet.

As we walked out onto the pancaked collapsed school, I thought I should not even be there. I wondered about crushed little bodies that may lie just beneath my dirty shoes.

One mother had lost 5 kids in the crush at the school named “ The Promise”.

Madame Telemak, a neighbor lady, standing in the debris with us, told me she heard a loud noise at 10 AM the morning the school fell. She ran over and witnessed the panic and screaming that enveloped the neighborhood. Family members and neighborhood people dug with their bare hands attempting to free anyone they could get to.

Another lady near us, wearing a black dress, sat down and put her face in her hand. She had lost no one in the disaster. She just wanted to be there. 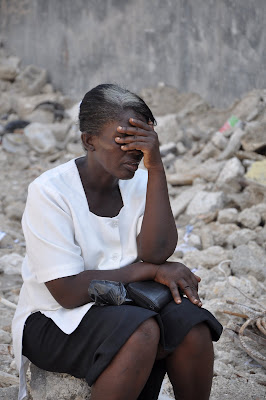 A young man pointed to a small room made of cinderblock that was still standing somehow. He said it was the principal’s office. I peered in a small hole and could see some shadows of objects but I could not tell what they were.

Walls of adjacent homes that had been attached to La Promesse were hanging in various states of disarray and shambles. The walls had been partially ripped off when the school collapsed and again with the process of extrication of survivors and victims.

A tiny shattered one room house perched on the side of the hill was the home of a peanut vendor who was inside the school when it collapsed. He was killed.

After a short time, there wasn’t much more to see or talk about. Helpless doesn’t describe the situation. A few pictures and collective shaking of heads, and it was time to leave.

Ed and I ambled up onto to the street. A black sign had been hung over the street which read, “In memory of the students and professors of Petionville who lost their lives under the politics of the bourgeois and businessman.”

A well to do grocery store owner of Lebanese descent told me that morning that everyone wanted to blame the poor for the tragedy. But he blamed the government for lack of adequate construction safety codes.

I agree with my sagacious father-in-law. Walls everywhere, not just in Haiti, need to be removed so places like La Promesse don’t collapse and crush the future for all of us.
Posted by John A. Carroll at 11:13 AM