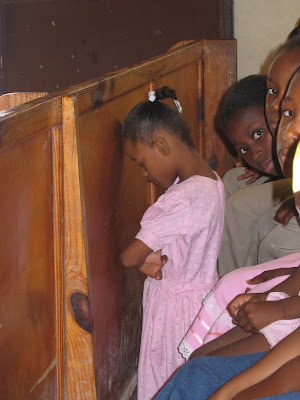 This year has been especially cruel to Haiti, with four back-to-back storms that killed hundreds of people, uprooted tens of thousands more and obliterated houses, roads and crops. A far richer country would have been left reeling; Haiti is as poor as poor gets in this half of the globe. Those who have seen the damage say it is hard to convey the new depths of misery there.

The Bush administration promised Haiti $10 million in emergency aid and Congress has since authorized $100 million for relief and reconstruction. The United Nations has issued a global appeal for another $100 million. We have no doubt that Haiti will need much more.

There is something the United States can do immediately to help Haitians help themselves. It is to grant “temporary protected status” to undocumented Haitians in the United States, so they can live and work legally as their country struggles back from its latest catastrophe.

This is the same protection that has been given for years, in 18-month increments, to tens of thousands of Nicaraguans, Hondurans, Salvadorans and others whose countries have been afflicted by war, earthquakes and hurricanes.

While the Bush administration has temporarily stopped deporting Haitians since Hurricane Ike last month, it has not been willing to go the next step of officially granting temporary protected status to the undocumented Haitians living here.

Haiti’s president, René Préval, and members of Congress have urged the administration to change its mind. We urge the same.

There is very little that is consistent in the United States’ immigration policies toward its nearest neighbors, except that the rawest deal usually goes to the Haitians. Cubans who make it to dry land here are allowed to stay; those intercepted at sea are not. Hondurans and Nicaraguans who fled Hurricane Mitch 10 years ago have seen their temporary protected status renewed, as have Salvadorans uprooted by earthquakes in 2001.

Haiti, meanwhile, more than meets the conditions that immigration law requires for its citizens here to receive temporary protected status, including ongoing armed conflict and a dire natural or environmental disaster that leaves a country unable to handle the safe return of its migrants.

If Haiti is ever going to find the road to recovery after decades of dictatorship, upheaval and decay, it will take more than post-hurricane shipments of food and water. Haiti desperately needs money, trade, investment and infrastructure repairs.

It also needs the support of Haitians in the United States, who send home more than $1 billion a year. What it does not need, especially right now, is a forced influx of homeless, jobless deportees.
Posted by John A. Carroll at 11:41 AM