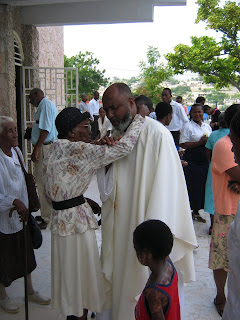 One of the documents on poverty from this conference, written by the bishops, stated the following:

“The Latin American bishops cannot remain indifferent in the face of the tremendous social injustices existent in Latin America, which keep the majority of our peoples in dismal poverty, which in many cases becomes inhuman wretchedness. A deafening cry pours from the throats of millions of men, asking their pastors for a liberation that reaches them from nowhere else.”

According to the documents from Medellin, the situation in Latin America was characterized by “institutionalized violence,” “unjust structures,” “internal colonialism,” and “external neocolonialism.” Together these amount to a “sinful situation” that leaves the Latin American countries dependent on the economic centers of power. In light of this situation, the bishops called for “ an all embracing, courageous, urgent, and profoundly renovating transformation.” The Church was called to “create an eminently Christian task.” The bishops commit the Church to a program of a “new society” in which the human person is “an agent of his own history.” The Church was encouraged to carry Christ’s message of liberation to the poor by becoming a poor Church, by being in solidatrity with the poor and giving “preference to the poorest and most needy sectors.”

In 1971 Gustaveo Gutierrez’s book was written. “A Theology of Liberation” remains the classic statement of the ecclesiological issues at stake in the rise of liberation theology. Critics charged that liberationists were guilty of reducing Christianity to a political ideology—in effect attending to this world while ignoring more “spiritual” concerns proper to the world to come.

Gutierrez wrote in an essay after publication of his book the following:

“One of the oldest themes in the theology of liberation is the totality and complexity of the liberation process. This theology conceives total liberation as a single process, within which it is necessary to distinguish different dimensions or levels: economic liberation, social liberation, political liberation, liberation of the human being from all manner of servitude, liberation from sin, communion with God as the ultimate basis of a human community of brothers and sisters.”

Jon Sobrino, a Jesuit priest in El Salvador, was recently criticized (2007) by the Vatican. Fr. Sobrino is a Spanish born priest and a well known proponent of liberation theology. The Vatican explained, “Father Sobrino manifests a preoccupation for the poor and the oppressed, particularly in Latin America. This preoccupation certainly is shared by the whole church.” The Vatican stated that the church cannot express its preferential option for the poor through “reductive sociological and ideological categories.”

Sobrino has written, “There is terrible injustice in today’s world, one which, slowly or quickly, brings the great majority of humanity closer to death. Justice and truth, therefore, are fundamental and urgent demands.”

According to liberationists, justice is the key concept for the Christian conscience of our day; the promotion of justice is the essential requirement of the Gospel message today. Gutierrez writes, “When justice does not exit, God is not known; God is absent.”

So maybe God IS absent in Haiti. Maybe God is not known here because there sure is very little justice in Haiti.

There also is little justice for Haiti’s Fr. Gerry Jean-Juste. The very priest who lived his life standing up for the poor, and feeding the poor in his parish, is in “exile” once again in Florida. His story is well known. Haiti and his parishioners really need him back.

The aging Latin American priests philosophy of preferential option for the poor wasn't wrong. It is the right and fair thing to do. But when the Jean-Justes of the world are terrorized and shackled and marginated and condemned of crimes they didn’t commit, the poor don't have any option. And when the Church leaders themselves don’t advocate for Jean-Juste, the injustice continues. Ignoring Jean-Juste is ignoring Haiti's "deafening cry" today.

Does this young boy pictured below, living with his family in rural Croix-du-Bouquets, look like he has many options? 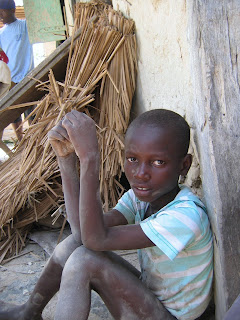 (See "Liberation Theology After the End of History--The Refusal to Cease Suffering", by Daniel M. Bell, Jr.)
Posted by John A. Carroll at 9:21 PM