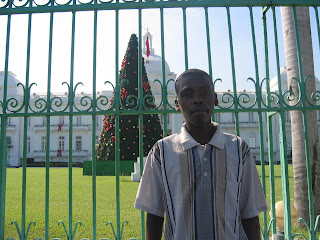 During the last several weeks, the Peoria Pundit, was kind enough to allow me to post on his web log.

Also, we were able to get Maxime on the plane to the United States to be evaluated for heart surgery. He landed safely in Cleveland yesterday.

Pictured above is Maxime in front of a festive Christmas tree in front of the National Palace in Port-au-Prince.

Yesterday, 400 special forces from the UN and members of the Haitian National Police led a raid into Bwa Neuf, another section of the slum adjacent to Soleil. Their goal was to kill a gang leader there named Belony. At least nine people were killed, all civilians, and 30 injured. The Haitian government gave the OK for this sweep to occur.

The people of the slum are not happy with the UN. 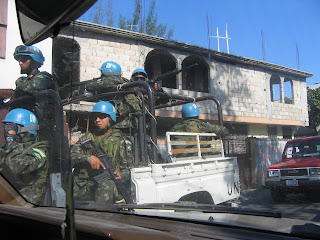