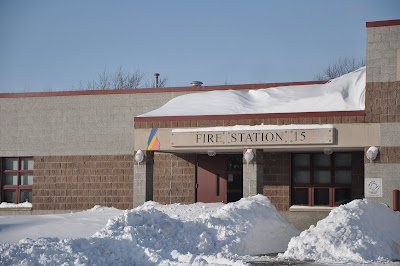 The snippet below is from the Peoria Journal Star during the snowstorm that hit a couple of days ago.

It is interesting from the standpoint that Mr. Rand, Executive Director of AMT, is positioning his ambulance rigs with the Peoria Fire Department (PFD) during the blizzard.

For years Mr. Rand has been against the PFD advancing their life saving services for the people of Peoria and Mr. Rand did not want the PFD EVER to be a transport service for sick or injured patients. Mr. Rand and AMT have had the support of the Peoria's three hospitals which have hospital administrators on AMT's Board of Directors. AMT, hospital administrators, and the Project Medical Director (physician in charge of all ambulances in the area) have taken this issue to the Peoria City Council multiple times over the years to keep the ambulance transport monopoly in the hands of AMT and out of the hands of the PFD. (And the Project Medical Director actually received a salary from AMT for his services.)

Transportation of sick people is a profitable business, and with the help of the hospitals and the doctors that control ambulances in the area, AMT has been successful in keeping ALL of the transport for AMT.

Now, with the snow storm, AMT is bunking down with the PFD. The PFD still cannot transport patients and only one station can give advanced life support medications.

I believe Peorians are actually WORSE off in the blizzard because AMT is now not in their usual locations and will respond when the PFD does. The "divide and conquer" concept has been weakened. The PFD and AMT will arrive at the same time now (at least from four locations), and AMT will be the only agency in ALL of Peoria (except the North Adams Fire Department) allowed to give advanced life support medications or transport the patient.

What happens in times like this if the PFD is the FIRST to arrive at a home where there is a life threatening problem? In other words, if AMT is tied up somewhere else, what happens?

As usual, the PFD cannot administer advanced life support drugs (except the North Adams Station) and not a single PFD station can transport the patient anywhere. The patient us supposed to wait until AMT arrives...and sometimes patients do not have time to wait. They may be too sick and not have the luxury of even a few minutes.

These are hard concepts to understand. But AMT understands very well and so do the Peoria firefighters who face this situation every day with very sick and injured Peorians. But money is involved and so is conflict of interest in the Peoria business community.

And please see this article I wrote two years ago regarding the conflict of interest and monopoly of ambulance services in Peoria.


Here is the article from the Journal Star yesterday:

In response to the storm, Advanced Medical Transport hired extra paramedics, technicians and dispatchers, and added more ambulances to its fleet to make sure residents get the help they need in case of an emergency.

A first for the company is working with the Peoria Fire Department to place four of its ambulances strategically at fire stations throughout the city. Several more ambulances will be stationed at AMT's headquarters on Sterling Avenue to respond to calls of service from there.

"When they go on calls, they will be working in tandem with us," Kennedy said of the Fire Department personnel. "That's more hands to carry people if you have to shovel their driveway or walk. It will allow our vehicles to be clean of ice, and keep the engines warm and the cab warm for the crew members, as well as keep the back warm for any potential patients."

Housing the ambulances inside the firehouses also will help maintain medications and other drugs at safe temperatures. The ambulances are stationed in South Peoria, Central Peoria, North Peoria and Northwest Peoria.

"That's the first time we've done that," AMT Executive Director Andrew Rand said. "We think it'll be better for patients and certainly improve our response times. We'll be driving in fire truck tire tracks."
Posted by John A. Carroll at 5:55 AM