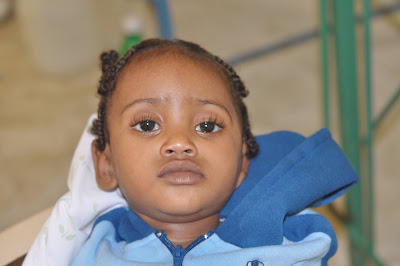 Renaldo, eight months old, of Bon Repos, Haiti was pronounced dead at 9:05 AM this morning at a Cholera Treatment Center in Port-au-Prince, Haiti.

Renaldo was the son of his Papa and Mama who were present at his death.

Renaldo was admitted to the Cholera Treatment Center yesterday with his mother who is also a patient there. She witnessed his death lying on a green cholera cot just a few feet away.

Renaldo is survived by his two older siblings and his loving aunt in Bon Repos, Haiti.

The family loved Renaldo. His expressive eyes and smile wrapped everyone up with happiness.

His family would like to thank all who cared for him during the last 24 hours of his life, especially his aunt, who is also the primary caregiver to Renaldo’s mother.

Minutes after Renaldo’s death, oral rehydration solution was used to baptize him on his sweet forehead. His body was wrapped in the usual fashion after a cholera death in Haiti and taken to an undisclosed location.

There will be no memorial services.
Posted by John A. Carroll at 6:14 PM