Peoria's EMS Not the Same as Miami's 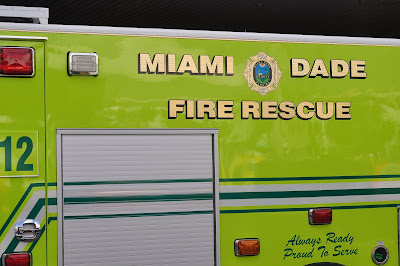 This Emergency vehicle was sitting in front of the Miami International Airport the other day.

This of course is not what the Peoria powers have wanted for the Peoria Fire Department (PFD) over the past two decades. Peoria City Council meetings were filled with local hospital administrators and physicians who wanted to keep the PFD at a basic level.

Up until a couple of years ago, the PFD was not allowed to provide ANY paramedic support to people who called them for medical emergerncies. All the PFD could do was provide basic life support and wait until Advanced Medical Transport arrived. And the patient waited too...

In the last 18 months Fire Station 12 in Peoria was designated Paramedic by the powers that be. This change was not announced or covered by the local media. So the average Peorian did not know the change had been made or even that their was a NEED for change.