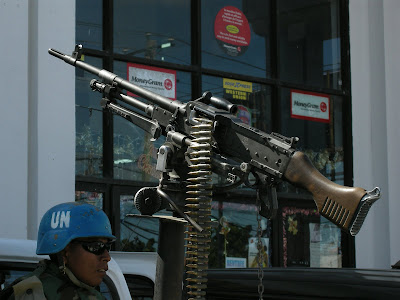 Haiti has had many kidnappings during the last three years. More kidnappings have occurred in Haiti the last few years than in any other country in the Western Hemisphere. There were hundreds of people kidnapped in 2006, 2007, and 2008. Everyone is fair game to be taken. Both children and adults are kidnapped.

Twenty-five U.S. citizens were kidnapped in 2008. We have known a fair number of people who were kidnapped or had family members kidnapped and Haitian Hearts has been involved in negotiations for their release.

This video tells the story of a man named Phil. After he was kidnapped in Port-au-Prince several years ago, we were with his family. There was much anxiety as deliberations went on between the kidnappers and the FBI. Phil's family was not allowed to talk to him on the phone or to deliberate with the kidnappers.

The night he was released, he appeared amazingly good for all that he had endured. While he was held in the slum, he told us that he couldn't understand why family members would not answer when the kidnappers called them on his cell phone. Phil understood after he was released that the FBI did not want family members offering outrageous ransoms and getting in the way of deliberations. It was a very tricky business.

We examined him the night he was released and started him on antibiotics for the shotgun wound to his left shoulder.

Phil left Haiti 5 days later with a child that needed eye surgery in the States. Phil and his family continue to work in Haiti today.

All kidnappings in Haiti must stop. Prostitution and kidnappings are not the answer for poor people that need money. Real long term, fair paying jobs for Haiti is the answer.
Posted by John A. Carroll at 8:35 AM