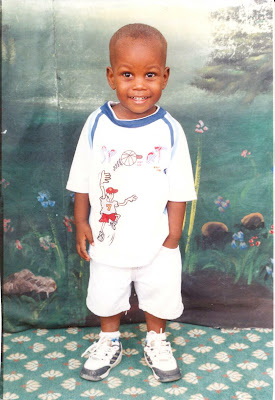 Heureuse is the young Haitian lady who was operated at OSF several years ago. She needs further surgery and is being refused care at OSF.

One of her two children, Kenley, is pictured to the right. Kenley is two years old and his father has abandoned the family. Heureuse lives with Kenley and his older sister in a slum in Port-au-Prince.

The Catholic Post in Peoria recently published an article--"Pope Contrasts Thirst for Profit, Logic of Sharing".

Pope Benedict spoke about the demands of economic justice during a Sunday blessing September 23.

"The hunger and ecological emergencies point to growing evidence that the logic of profit, if dominant, increases the disproportion between the rich and the poor and brings a ruinous expoitation of the planet."

"...when the logic of sharing and solidarity prevail, it is possible to correct the route and orient it toward an equitable and sustainable development", he said.

The article also stated that "the Pope emphasized that economic justice was a matter of balance. Making a profit is not in contradiction with justice, he said, but the church teaches that a fair distribution of good takes priority".

When Heureuse dies in the slum for lack of heart surgery, who will take care of Kenley and his sister? Will three people actually die due to "thirst for profit" in Peoria?

I wonder what Pope Benedict's advice to OSF regarding operating Heureuse would be?
Posted by John A. Carroll at 2:30 PM