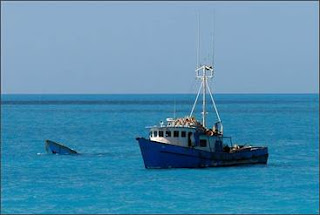 Since the beginning of this year, hundreds of Haitians have left Haiti in rickety boats. No one knows how many have drowned or have been eaten by sharks.

In April, 704 Haitian migrants were stopped by the Coast Guard and hundreds have been returned to Port-au-Prince.

Unlike their Cuban neighbors, Haitians don't usually vote Republican and Haitian fastballs are not near as accurate as Cuban baseball players throw.

The U.S. does not want Haitians here.

Addressing 1,200 mourners in an emotional and politically charged service in south Florida, the Rev. Reginald Jean-Mary eulogized Lifaite Lully, 24, who drowned trying to reach the U.S. in a boat carrying 102 Haitian refugees:

"We have come to mourn the death of hope. This young man was....in search of security and freedom and meaning in his life."
Posted by John A. Carroll at 10:14 AM