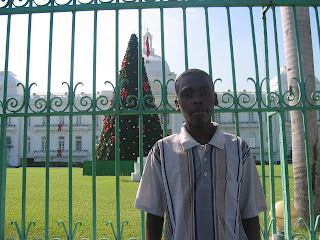 Maxime, in front of the National Palace in Port-au-Prince, December, 2006.

Haitian kids like Maxime and Jackson continue to die while Peoria will spend an estimated $850 million during the next 10 years to "makeover" their two main medical center campuses. The medical centers are located one block from each other.

See editoral in the Peoria Journal Star regarding this expansion. Also, note that no mention is made of Maxime or Jackson.
Posted by John A. Carroll at 6:57 AM